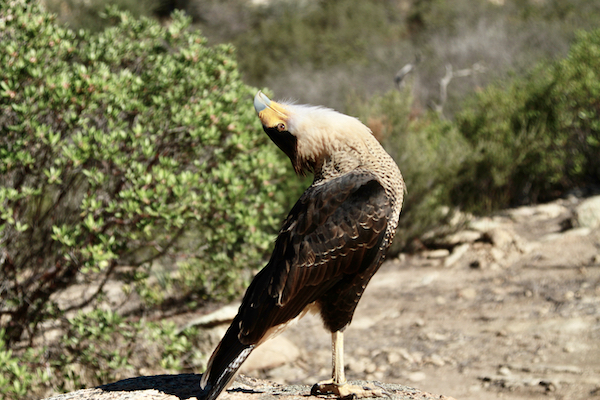 Crested Caracaras are native to Southwestern US down through South America

Perhaps one of the most beloved of the Avian Behavior feathered ambassador crew, Larue is well known for his distinct character, vocalizations, and sensitive temperament. Many Larue fans have never even heard of a caracara upon following his antics on social media. Larue helps tell the stories of biodiversity as well, as many species of caracara are largely unstudied. He endears us to the many ways birds interact with their environment, and how many challenges of the birds we don’t know much about are important to understand before it’s too late.

Hike with Larue during our Extreme Bird of Prey Experience or our Elite Experience, where you can watch him strut his stuff up the hillside. With Larue, you never know what is going to happen on a walk (neither do we!).

Likes: Toy lizards, baths, and long walks on the hillside

Caracaras are largely scavengers and show up to carcasses alongside vultures. They will hunt in some cases for small mammals and reptiles. There are 10 species of Caracara, one of which specializes in eating wasps.