Why Does He Sound that Way? Larue the Crested Caracara’s Vocalizations 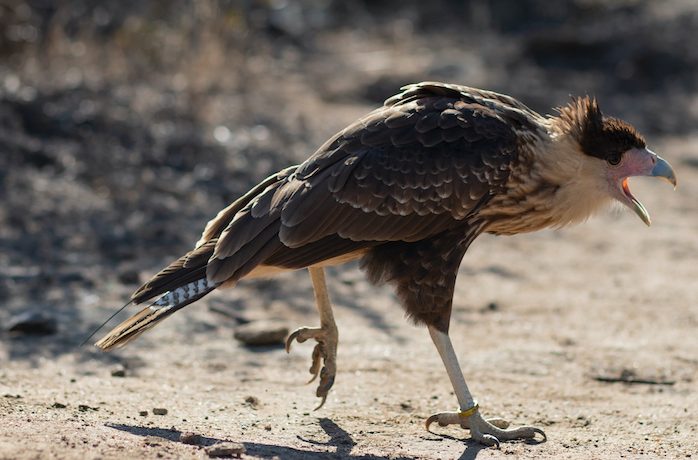 10 Dec Why Does He Sound that Way? Larue the Crested Caracara’s Vocalizations

Larue the Northern Crested Caracara is a popular little bird on our Instagram, and it’s not hardto see why. He is incredibly expressive the way he raises and lowers his miniature crest, stands on his falcon toes when he is curious about something, responds to his bird trainers, reacts to “new” items in his environment (I like to say it’s like 50 First Dates, where new items to him could be items and stimuli he has seen several times before), and perhaps most noticeably, his baby bird of prey vocalizations. 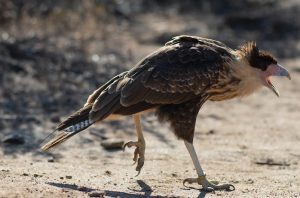 psittacine vocals I have heard before. His pitch goes up and down depending on what he is looking at and his proximity to us. Sometimes, we actually get a bit on edge when Larue is silent (more on that below!) When we show videos of our caracara chronicles, it’s understandable that people would ask why he always makes those baby falcon calls. The fascinating answer does not fit tidily in a social media post, and of course, we love to share stories about Larue, so get ready to learn a bit about raptors! 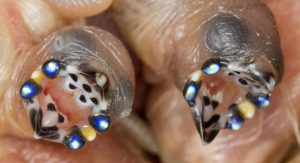 mom and dad birds return to the nest with food. They have many different strategies to capture attention quickly, ranging from crazy patterns on the inside of their mouths, like Gouldian finches to even siblicide in order to make sure they get as much as they need to in order to survive.

Young hawks, owls, falcons often make a lot of noise that can be heard by the casual neighbor when the parent birds of prey fly to and fro. In fact, each year when the local red tail hawk pair has their chicks, our Eurasian Eagle Owl Guinness becomes very distracted by the calls of the young red tail hawks when he is out flying on the hillside. The fledging red tail hawks will even call erratically in flight and harass the parent hawks so much, that he will sometimes fly off and sit on a rock, waiting for us to come retrieve him. The local great horned owl youngsters will call throughout the summer as they are learning to hunt and fend for themselves each evening, until eventually they learn that their calls no longer mean what they used to when they were in the nest.

Bird of prey mortality is extremely high, especially in their first two years. Reports show anywhere from 50-90% of raptors don’t make it to their second year, with many issues occurring in the nest, from abandonment, parental mortality, starvation, fledging deaths, predation, and lack of foraging proficiency.

A parental vocalization call is what Larue now associates with us. He is a hand raised raptor, which, if you have 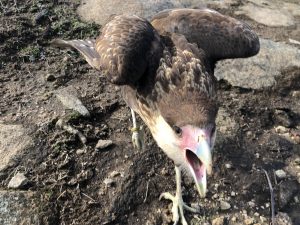 listened to our podcast, we spoke a little bit about how hand raising raptors works. The end result is a little bit different with raptors than it is with parrots, as most raptors aren’t as social, they don’t forage or flock together like parrots do, don’t retain their familial units, and thus their relationship structure is a little different. Hand raising is recommended for some species, whether they are going to become education ambassadors or falconry birds, because the early socialization is best to reduce stress. Owls, some accipters, and falcons sometimes are good candidates as a general rule of thumb for hand raising.

Sometimes, birds of prey are hand raised out of necessity in a wildlife rehabilitation facility and end up being inadvertently imprinting on humans and can’t be released back into the wild. This is why finding and raising any kind of wild animal is not only discouraged, it’s highly illegal. It’s dangerous for humans and pets and almost a guaranteed death sentence for the wild animal.

Larue was hand raised for a variety of reasons, and his food-hand association was high because he arrived with angel wing. Food association is one thing some trainers avoid for a few reasons depending on what job the bird of prey will have. With Larue, we started out feeding him with tongs, but it became clear that we needed to feed him tidbits at times from the fingertips in order to change his bandages to keep his wing healing properly.

Now, unlike a parent raptor that would kick the youngster out in a “ride or die” type of situation, we are always near Larue. He sees us constantly throughout his day, and as we are passing his aviary and he starts calling, he gets reinforced for our proximity to him. Some falconers have successfully worked through vocalizations through routine hunting and keeping the visual between humans and birds to a minimum. For now, this isn’t logistically feasible.

In fact, when Larue isn’t calling, we take notice. We have noticed that the coloration on his bare facial patch that is characteristic of caracaras in tandem with the presence (or lack thereof!) vocalizations can give us clues as to how alarmed he is when we are out walking. One day, our trainer Katie noticed he wasn’t vocalizing when she did morning 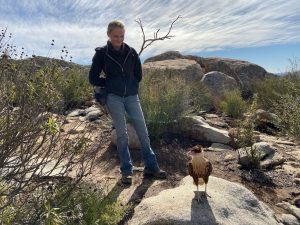 rounds. She immediately jumped into action, took a closer look, and found he wasn’t feeling well and swooped him off to our vet. We were lucky to have found out so quickly what was up with him.

While we have been working on some shaping plans to reinforce for quieter behavior, we do focus on giving him tools to work through some of his more demanding challenges. Caracaras have unique characteristics that make them interesting training subjects and wonderful teachers.

Larue has helped us grow *a lot* in our understanding of animal training and behavior. Check out this podcast about this endlessly curious character.

While supplies last, you can purchase greeting cards or 2020 calendars that will benefit Larue’s wild caracara cousins. Proceeds from the sale of these items are being donated to conservation organizations that specifically benefit crested caracaras and their wild neighbors! Check out the many faces of Larue and his free flying friends by professional photographer Stephanie Cruz Herrera.