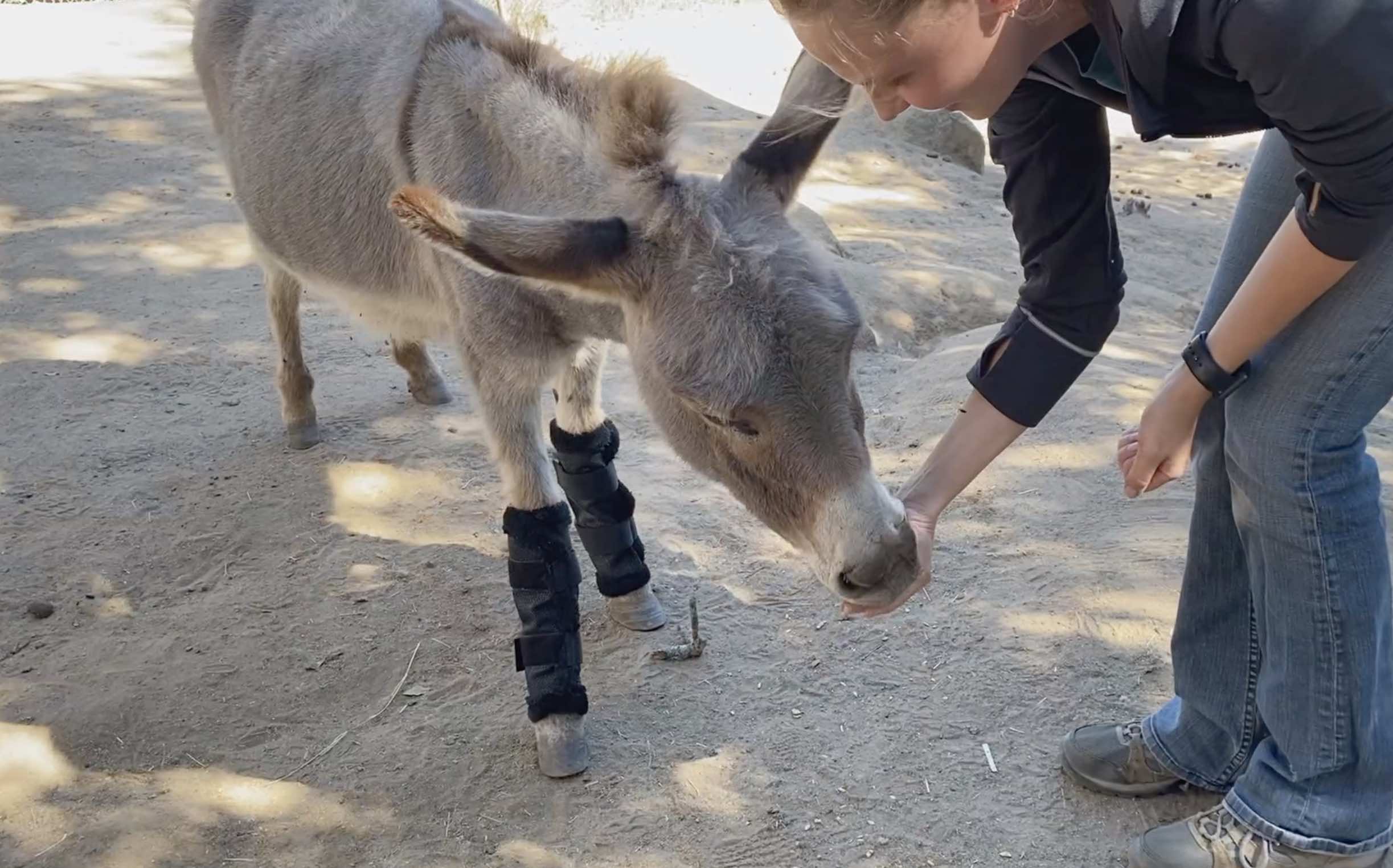 Posted at 18:12h in Animal Training, On the Ranch by Hillary Hankey
0 Likes
Share

Fly season is upon us, which our mini donkey’s aren’t a huge fan of, more specifically Louise. Louise is allergic to flies but she is also reactive towards fly spray. This is very common among equine species like horses and donkeys. The familiar approach might be to put on a halter and lead to spray down her legs with fly spray. Obviously this has worked in the past because people keep using this technique. Here at Avian Behavior our training paradigm is based around progressive animal training, which is based on positive reinforcement. We have trained our other donkeys to let us use fly spray on their legs with positive reinforcement methods but we decided that fly boots would be more practical in the long run. Using positive reinforcement for training behaviors not only helps build positive relationships with you and your animal, but it also builds stronger behaviors that will be more sustainable overtime.
When we first introduced the boots to Louise, she was aware of them. This looked like looking at the boots and smelling them, but she wasn’t showing any signs of discomfort yet. When one of the trainers undid the velcro straps on the boots, that is when we saw reactive behaviors with Louise. Her ears turned backwards and she hoofed it out of there as fast as she 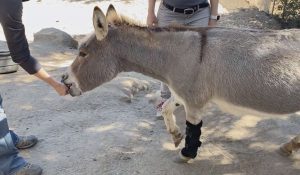 could. This gave us trainers a lot of information on how we were going to proceed with this behavior. We started off with pair the velcro sound with treats from far away. We had an intern stand about six feet away and slowly undid the velcro as a trainer simultaneously fed her treats during the velcro noise. This paired the once aversive noise with good things. When deciding how far away we wanted the intern to be with the boot, we wanted it to be close enough to where she can see and hear it but far enough away that she didn’t feel the need to leave the session. As we paired the noise with treats, we also had our intern slowly move closer to Louise. We would have her make the velcro noise, then we would have her take one step closer and we would repeat these steps until we were almost directly next to Louise. We also focused on not constantly feeding her through the noise. We would use small approximations but having the intern make a short velcro noise and then the trainer would feed after the noise was made. Slowly this turned into us being able to fully make the velcro noise and only feeding Louise after the noise was made.
The next challenge was to be able to have the boot touch Louises leg. When we first introduced the touching, we didn’t include the velcro noise at all. We kept the touching very simple and quick at first so she wouldn’t rehearse moving away from the boot. Communication between trainers was important at this step so we could time the pair of the food with the slight touch of the boot. As Louise became more comfortable with the touching of the boot we worked on slowing down our rate of reinforcement from constant feeding to only feeding after the boot made contact with her leg. We really wanted to break this behavior down into small pieces to keep Louise successful and comfortable throughout the whole process. If we moved too quickly with our steps it would set us back even further in our training plan. We also focused on the duration of the boot touching the leg and the feeling of wrapping the boot loosely around her leg. When she was showing comfortable 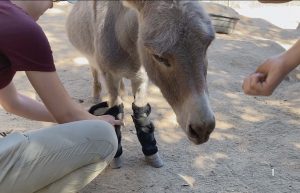 body language throughout us touching and wrapping the boot around her leg, we then added the velcro sound back in. We would add the velcro noise when it was logically next in the process of putting on the boots. The person who was putting on the boot would undo the velcro close to her, and then proceed to touch and wrap the boot around the leg. As Louise became more comfortable with the process of putting on and taking off the boot, we slowed down our rate of reinforcement even more. We only fed for the more “challenging” parts of the process like the touching and wrapping of the boot around her leg.
The other obstacle we had to face was her moving with the boot on. This was a tricky step because if she reacted negatively to the boot being on her leg, there wasn’t a safe way we could help take it off. We started with wrapping the boot around her leg and having one trainer hold the boot in place while the other trainer lured her to step forward. We knew we needed to slice the boot-strapped-on approximation in to these small steps and have the trainer hold the boot in place while she walked, because she had already shown mild discomfort when she moved while the boot was on and she moved ever so slightly. It meant we could safely and quickly remove the boot if she showed any signs of discomfort.
After a few steps with this method, we then moved on towards fully putting on the boot. When we secured the boot, we wanted it to be tight enough so it wouldn’t slip off and spook her more but loose enough so it would restrict movement. We 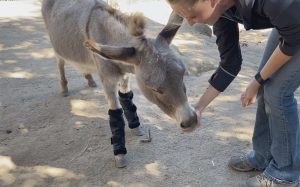 prepared ourselves for the chance of a possible negative reaction to the boot on while she was walking. We kept the sessions with her walking with one boot on very short to keep her successful and to show that it’s not permanent. When we moved on to two boots we followed the same steps but we were able to do it a lot quicker. We kept sessions with them on short and we slowed down our rate of reinforcement to intermediately reinforcing.
We were presently surprised on how quickly we were able to train this behavior with Louise. Communication between trainers was very important to ensure we were reinforcing for the correct behavior. Communication also helped prepare both of the trainers for any major reactions as the result of the different approximations. We are always looking for ways to improve the quality of life for our animals, this includes training voluntary husbandry behaviors like putting on fly boots. For more information visit our YouTube channel where we have a video all about this behavior!
Want to apply more positive reinforcement in your life? Check out our online learning resources at the Avian Behavior Lab. You can also subscribe to the podcast and join our email list!