Gambling with a Hawk

07 Dec Gambling with a Hawk

When you get a hawk like Casino, you have a feeling that he is going to be a bit of a risk. He’s an uncommon hawk to be finding himself for sale at two years old at a neighboring falconry facility. And yet, when I talked to the falconers there, he had been a struggle for them. He was too nervous, he broke his beautiful red tail, and he just wasn’t working out. And then there is the fact that he is an Augur Buzzard, a species of hawk that is known to be challenge to train. An Augur Buzzard is a red tailed hawk from Africa (Buzzard is actually an Old World term for hawk, and was misused when explorers came to North America and mistook New World Vultures for buzzards, or hawks).

Africa is a challenging continent for animals to survive with so much competition. There is a staggering 153 species of birds of prey in Africa, with 36 of those as hawks and buzzards alone! With so many other predators, it can be easy to see why it would behoove an animal to be naturally 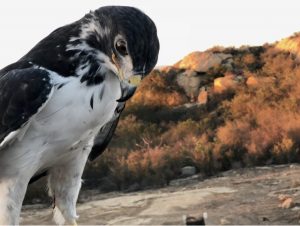 wary of any changes in the environment that might indicate ever present danger. In contrast, animals from isolated islands like New Zealand and the Galapagos are typically bolder because they evolved without a lot of predators and competition. Augur buzzards are notorious for being a sensitive hawk, nervous at times, hard to generalize to new situations, and just not as steady as a bird like a red tailed hawk.

Finding an Augur Buzzard in the US is difficult. As a non-native species of bird of prey, they aren’t very common. But they are very useful as conservation education raptors, especially when using native species isn’t always a possibility. Not only that, but they are stunning. With slate gray and chalky white body feathers and the gorgeous rusty red tail feathers like our own red tailed hawks, they are breath taking raptors. 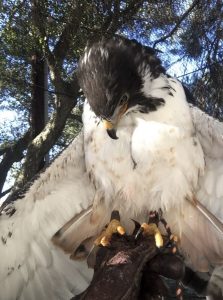 Casino mantling on the glove when he first arrived

But in February 2018, when I picked him up, it was clear Casino had some issues. First, he mantled on my glove so hard when I fed him that his wings practically criss-crossed. Mantling is a natural behavior that birds of prey will do when they have food, using their wings to cover their food and a potential competitor comes near that might steal their food. Some mantling with trained birds of prey is customary, as the human trainer is often close by when the raptor is eating. But Casino’s mantling was dramatic. In conjunction with mantling, he gripped the glove tightly with his feet and tucked his short red tail up between his legs so hard, he broke his tail feathers. The whole tail looked pitiful.

The picture this hawk sent out was one of an animal that needed a bit more time to get accustomed to different stimuli in his environment. It would take a lot longer than I expected to get him safely back in the air. Hence the name, Casino: he was going to be a bit of a gamble.

The first thing I did was put him the mews and let him molt. No expectations, just start molting feathers. He still had some of his brown juvenile feathers from two years prior, so he needed to get all of his adult plumage. It was so thrilling to see those feathers drop! Once he completed his molt towards the end of July, I put him back into training as if he were a wild hawk. I worked him in low light conditions, getting him used to me. This means I only 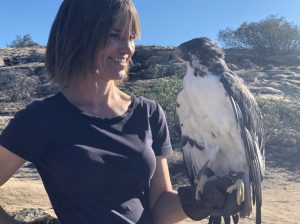 Casino sits much more comfortably on the glove, even when completely exhausted from uphill repeat flights

worked with him when I was feeding him, and my human form was obscured with darkness. At first, he was confused, but he quickly got the point and our relationship started to move forward. We quickly worked into full light, and I started stepping him up and flying him to my glove in my office.

Once he was confident with me, I quickly introduced other people so that he would develop other relationships easily and not get stuck only seeking safety with me.

Finding Casino’s rhythm took weeks of slow and steady work. We kept his sessions simple, just flights from perch to glove or glove to glove without a lot of distractions, wind, or other challenges. It turns out, he hated phones, so we started every session with phones barely visible and then worked them more and more in his view. We worked him up and down hill flights to build his muscles, but every once in a while, without warning or any discernible trigger, he would bypass the perch and take off for the horizon at full tilt. It was frustrating and humbling work. As a trainer, the foundation of our relationship building is to avoid these fear and avoidance-based responses.

When we hit a plateau with these bail aways, I began a different method of managing his motivation to fly safely, which I call feast and fast. On days that we don’t work a lot, I would feed him a smaller meal and have a short, light training session. The next day, he would be motivated to work a bigger session and a more challenging behavior. When he takes on a hard task, like pushing to a new step in his training, I want him to have a nice full crop and to feel like the harder effort was worth it. Hence, the feast.

The next day, we might work a slightly less challenging step, and get a less full meal to match. The following day will be a light day, and the cycle will start over. As he gains confidence through the cycle, the “fast” days become less frequent, the feast days become less extreme, and he gains trust through the routine and expectation of what they bring, much like a younger bird of prey does when learning to hunt in the wild.

Finally, we started to have consecutive sessions without his bail-aways. We were able to add in other environmental challenges: new people, small crowds, flying over people’s heads, sunglasses, hats, bigger hats, different looking people, people moving around, different colored clothing, anything we could think of that would bring him closer to what would 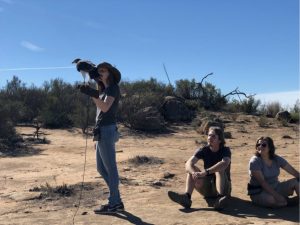 The staff worked with Casino adding in big hats, sunglasses, and other variables.

look like a normal Bird of Prey Experience here on the ranch, where the environment is a little less controlled than a tightly choreographed training session.

Finally, after months of work, we brought him out for his first Bird of Prey Experience on Thanksgiving Weekend. It was so exciting, and he did fantastic. It was so thrilling to watch him succeed again.

Casino’s path has only just started, and we still have longer to go. We have methodically shaped his body language to train him to present himself more calmly, but he still will often sit on his tail in other scenarios and break his feathers. There is much still to accustom him to for him to be comfortable in more environments, and all it takes is one bail away for us to really hate life tracking him down.

But for all that his training has put us through, humbled us, and made us grit our teeth, it has taught us so much more. And if training birds were easy, it wouldn’t be nearly as much fun. Setting challenging, unrealistic goals for ourselves is actually easier than setting mediocre, average goals. Mediocre goals are part of our every day lives, whereas challenges stretch us and force us to become a different version of ourselves. This extra effort is more reinforcing because we feel these new sensations of progress that we have never felt before.

Many times, Casino made me want to give up because I was certain his pattern of fear-based behavior would make me lose him. There is always that possibility with birds in flight, for sure, and it’s good to be aware of it. But the fear is no longer paralyzing. And in sharing the story of Casino’s origins, we share the understanding that his journey, like ours, is never complete.

If you follow us on social media, feel free to root Casino on when you see him! If you want to book an Experience to see this incredible hawk in action, check out our Bird of Prey Experiences. His path is one that can make a trainer question everything one day and feel on top of the world the next.

For more stories about our birds, get on our email list and get the best stories and news bits delivered straight to your inbox.