Hooding and Birds of Prey 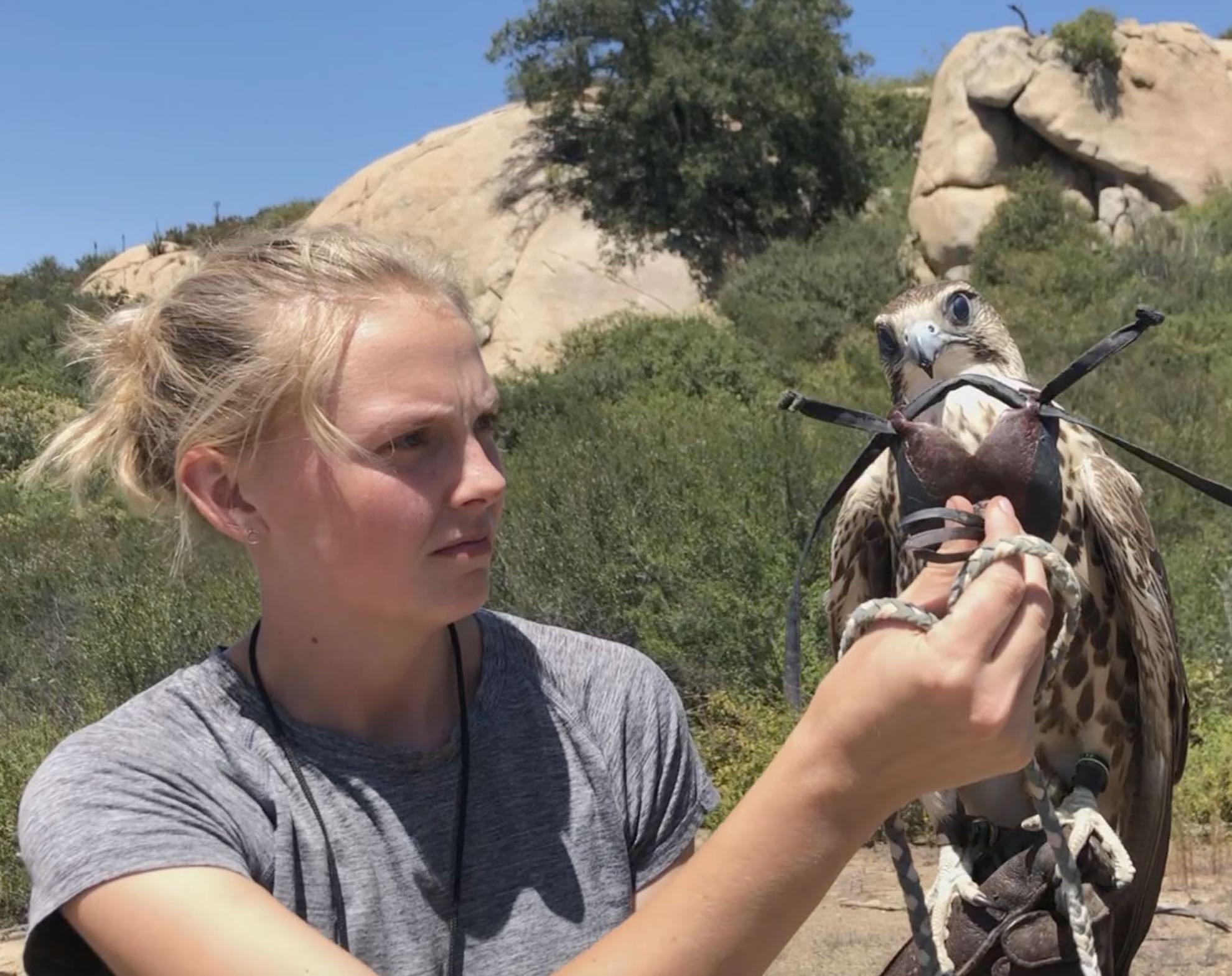 01 Jun Hooding and Birds of Prey

Reprinted from our sister site, The Avian Behavior Lab

If you have ever seen a bird of prey hooded sitting calmly, you might have wondered how a falconry hood works. Is the raptor calm because he is hooded or is he petrified in fear? Does it enjoy being hooded or is it just used to it? And most importantly, why do we use a hood for birds of prey?

How Bird of Prey Eyes Work

To get to the bottom of this, it’s important to first understand how complex raptor eyes are. Because most raptors hunt using their incredibly keen eyesight, their eyes work very differently than ours. Their visual acuity is due to the large size of their eyes, both in absolute and relative terms.[1] Flicker fusion rate, or the rate at which intermittent light stimulus appears to be steady, also plays a role in raptor vision.[2] Humans process around 60-75 Hz, whereas a peregrine falcon has been calculated up to 129 Hz. This is the difference of about 25 frames per second, as humans process a movie at a theater, to 130 frames per second.[3]

The importance of raptor eyes as it relates to their ethology cannot be understated. And what it means is that a bird of prey is constantly aware of the next opportunity as well as the next threat. As raptor trainers, this is one of the many features of working with birds of prey a challenge for the last three to four thousand years. Coupled with their relative lack of social reinforcers, this puts a raptor trainer in a position to carefully monitor their value and the reinforcers they have available to them when influencing the behavior of a bird of prey.

Positive reinforcement training methods for just about any animal are based on the delivery of food among other types of reinforcers, and raptors in particular being extremely food motivated excel with a food based training methodology. Food is not the only reinforcer and certainly not without its drawbacks. Space, comfort, water, exercise, visual stimulation, hunting opportunities, 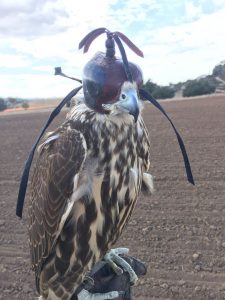 and enrichment are all among a comprehensive toolkit of effective reinforcement strategies. Because the prey drive is so strong, there are times when the pairing of food with the trainer or the delivery of food itself can cause problems. There is also the added issue of satiation, which can be a particular problem when the bird of prey trainer is far from a travel carrier or mews and must somehow transport the bird back to safety on the glove in mutual comfort. This is where a properly fitted, well trained falconry hood comes into play.

The Purpose of Falconry Hoods

The purpose of the falconry hood is to control the moments a trainer and bird of prey interact so that the bird recognizes the trainer’s role in positive and neutral moments and minimizes negative stimuli.  This means that the amount of time the bird is hooded is not a constant and can fluctuate in response to the trainer’s growing reinforcement value. Because birds of prey don’t have many social reinforcers and the relationship does rely largely on reinforcers such as food, the trainer can avoid filling up the raptor’s crop by transporting it with a hood, thus removing the need to deliver food for staying on the glove and not try to fly off, either in response to a scary stimulus or in anticipation of its next opportunity.

A falconry hood can be a critical tool in preventing problems because it can be so hard, if not impossible, to train a raptor to be calm in all circumstances. This means when unpredictably scary stimuli arise and we have a raptor with us, it can associate us with the fearful situation, whether we choose to restrain it on the glove or it flies off, leaving us in a lose-lose scenario. In the case where we do have food that we can use to counter condition the bird of prey to stressful stimuli, we are limited by the raptor’s appetite, and if it is fully flighted and able to fly, there is a good chance we can overfill it and lead to a situation where it loses the motivation to stay on the glove as well.  The same can also be said for changing and unpredictable circumstances when we can no longer rely on food motivation to help us work the bird through in a calm manner.

It cannot be understated that the manner in which a raptor is trained to wear the hood has a huge impact in the comfort that it exhibits. Hooding can be trained through choice-based training that includes positive reinforcement utilizing tidbits and negative reinforcement that uses distance to reinforce the desired response. Both have their merits and drawbacks, as detailed in our hood training course in the Avian Behavior Lab.

There are some methods hood training and hood use that are on the other end of the spectrum, leading to hood avoidance and overuse. At Avian Behavior International, the hood has a context: a bird that is hooded is typically going 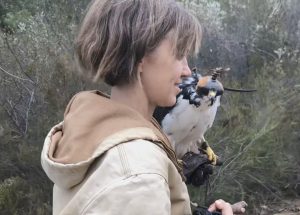 somewhere to hunt or exercise. Therefore, the hood gains the added quality once trained of being a means to a very valuable end. For falconers out in the field, the hood can also be used where carrying around a crate is virtually impossible, to move the bird easily from one field to another, avoid stressful encounters, or return a bird to the vehicle or crate after a hunt that has taken falconer and raptor far afield. It is understandable that many raptor trainers may simply not have a need to train a bird to wear a hood simply for lack of need. This does not, however, mean that hoods are never needed.

For an animal who is frequently looking for his next prey opportunity or watching over his back for his next battle, being on the constant lookout can conceivably be quite stressful. A well-conditioned raptor, whether in falconry or education, can calmly accept many different situations but there is a still a need to help control negative scenarios to minimize stress. Training a raptor to wear a hood is a valuable tool when trained through choice. We may think having visual blocking as stressful when drawing on the human experience, but when looking for markers of calmness and keeping an eye on the raptor’s ethology, we can make our interactions and our raptors’ experiences much more positive on the whole when we enable controls to avoid negative and scary stimuli.

At the Avian Behavior HQ, we have webinars from time to time for non-members, too! Plus, get animal training behavior resources in your inbox getting on our email list!

Do you want professional mentorship and access to behavior inspo every day? Sign up for the Avian Behavior Lab. A Premium Membership allows advanced and professional trainers to access to a growing course library and a forum with dozens of topics for one on one guidance to your toughest challenges! Facility Memberships are available for Group Memberships! 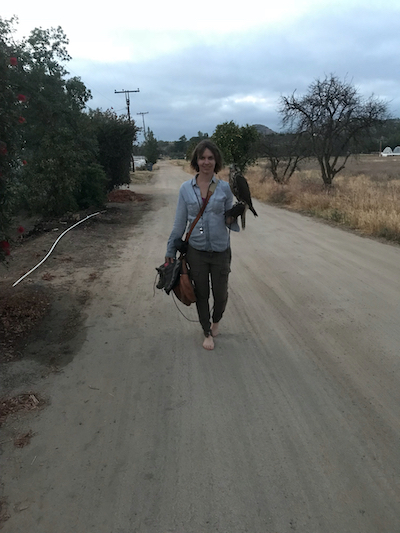 The author is not immune to falcon flyoffs and recoveries. Here a saker falcon is recovered five miles from her training field after a 7 hour chase. She was safely hooded and walked back to the truck and travel carrier.