How a Bird on a Houseboat Can Change Your Business Model 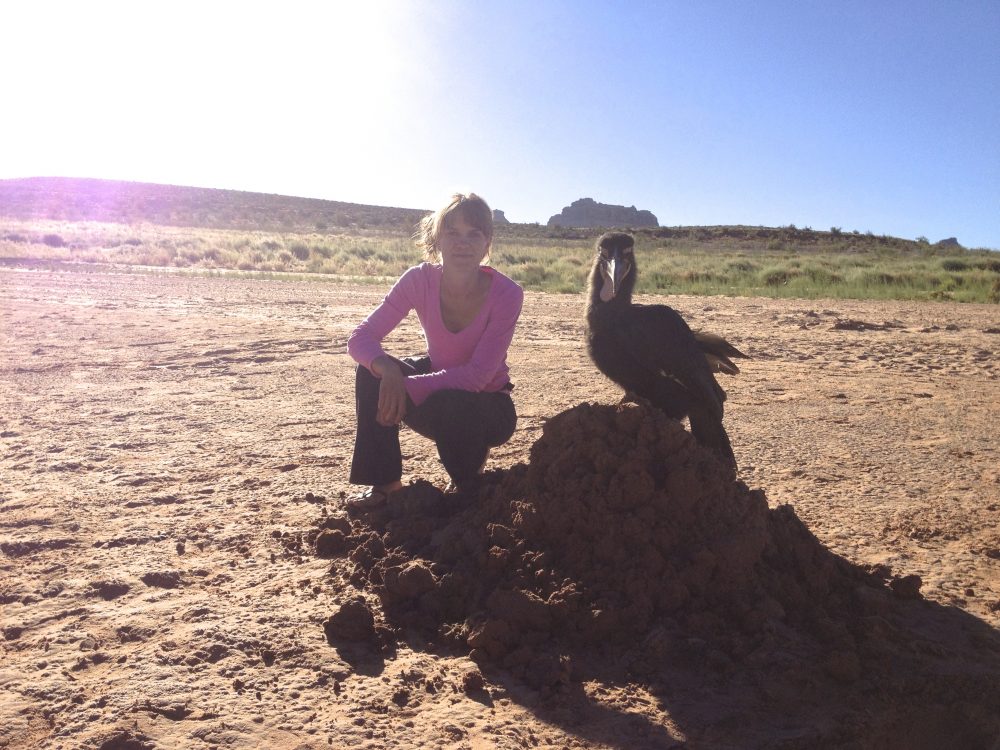 Have you ever had a particular event or individual that you can pinpoint that started a change in the way you viewed the world? In my case, it was both. It started with Kipling, our Southern Ground Hornbill, and when we went on a project in Lake Powell. Kipling turned six years old on March 8th, and his hatchday gave me the opportunity to reflect on how much he changed me from the moment he came into my life. Kipling was the first bird that came to Avian Behavior International in April of 2013. It was a moment of utter joy and sheer terror. I was so excited to be able to train from the ground up such an incredible species, known for its intellectual capabilities and charisma. I was once told that when a male Southern Ground Hornbill turns two years old, they can’t be used for these close encounters. As a species, they become aggressive, territorial, and unpredictable. At six years old, I am pleased to find that while Kipling’s training requires a lot of our attention, he’s still a wonderful ambassador and regularly goes on hikes with guests, much to their delight. 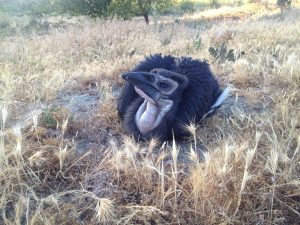 Kipling was six months old when we started the Lake Powell project. He had been in flight training since he fledged and was well socialized from this early age. He had gone almost everywhere with me and was used to seeing new faces and places. I had friends that would babysit for me because of his insatiable appetite as he grew, sometimes gaining 100 grams a day, and he met so many wonderful people. At least he was fit and ready for what lay ahead.

Getting to Lake Powell

At Lake Powell, I expected to stay on shore with the birds in the aviaries that we had brought and carefully packed. We had an RV, van, and box truck as well. All of these carefully laid plans went into the air when it was time to go further into the lake. We were suddenly in charge of navigating by house boat. Kipling got to live in his own room, and the other birds filled up bathrooms, living spaces, and the deck when we were safely harbored. The film permits we had would take us to the Rainbow Arch and many other spots that were deep inside the nooks and crannies off the beaten path from the lake.

Kipling proved to be incredible. When it was windy, he powered through the wind and would waddle downwind back to his mark. When he was full, he would fly on cue just for the chance to play with the fluffy boom microphone cover. His was practically unstoppable and dare I say, unflappable. I wasn’t weighing him daily to 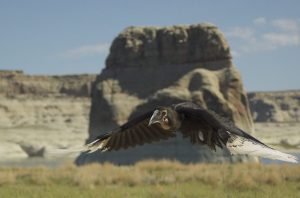 Practicing on the shores of Lake Powell

judge his motivation or hardly even weighing his food. I was basing his motivation levels off his behavior, his sense of routine, and using a lot of secondary reinforcers (the fluffy, fun microphone cover, which would later come back to haunt us during a National Geographic filming segment). In fact, when I weighed him the day after we returned home, I found he had gained more than 400 grams since we had left, presumably much of it muscle from flying so much.

Mischief, thy name is Kipling

Almost daily we would have tales of Kipling mischief to tell the film crew. Kipling had locked himself in his room one morning, so we had to remove the knob to get him out. We taped the door knob so he couldn’t lock himself in, and he ended up removing the entire knob the next day. Everyone howled at his shenanigans. He was always curious, yet still the enigmatic hornbill that was the symbol of African conservation that we were trying to show the world.

One of my favorite moments was on our return trip from the depths of Lake Powell, because it took two days of 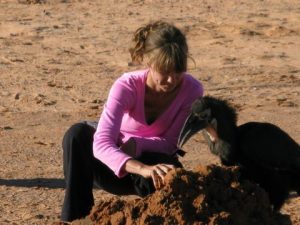 The final morning playing on the beach

houseboating, we had anchored on shore overnight and some of the camera crew were sleeping on the beach. Kipling happily trotted off the boat with me and hopped on the crew’s sleeping bags, peaked in their coffee mugs and water bottles, and played on the beach for a few minutes before breakfast to rouse the sleepy men.

Over the years, Kipling has taught me so much about running this organization and connecting with people. Through him, we have raised money and awareness for organizations such as the Mabula Ground Hornbill project, which specializes in the research, rehabilitation, and release of the Southern Ground Hornbill in South Africa. In this area, it is endangered and in much need of help, along with many other species of birds that sometimes get overlooked next to the megafauna also struggling.

Kipling has also brought me to new territory in training birds with positive reinforcement that I so eagerly wanted to be, and it really started with our time in Lake Powell. This is where I distinctly remember realizing that I had been used to relying on guarantees and safety nets for a long time that weren’t really there. You don’t always get a storyboard, a roaring audience, or a boss you can blame your shortcomings on. Free flying 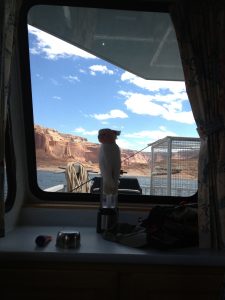 birds is extremely challenging with risks and variables you cannot always know about or be aware of. The best you can do is be confident in your skills through constant education, development, self-awareness, humility, failure, and commitment to improvement.

Working on that project fundamentally changed me. At times, it felt like a comedy of errors. The weather was horrible, the houseboats were difficult to drive and some in our group had major mechanical issues. The lake was horribly low with drought, causing the harbors to be dangerously shallow. The crew was wonderful, but I didn’t know anyone, and flying birds with people that you don’t know is challenging.  But it all prepared me perfectly for the start of Avian Behavior International and the world of entrepreneurship, conservation education, and running a business model off of free flying birds.

Sharing birds like Kipling allows us to share a unique connection to the natural world and all of its struggles with our audience. Through this incredible reward, we use the sacrifices of time, resources, and what feels like sanity, as well as a host of other personal and professional challenges as stepping stones to our place in the world of modern conservation and animal training.

If you are interested in learning more about Southern Ground Hornbill conservation, you can visit the Mabula Ground Hornbill Project and sign up for their email list! It’s filled with interesting field notes and information.

If you want to get face to face with a unique ambassador, come for a hike with Kipling. At six years old, every day is a different day with him. He is fun to watch play in his aviary and incredible to watch fly in the hills. Check out our events schedule or contact us to set something up.