Plucker: The Story of a Lost and Found Red Tailed Hawk 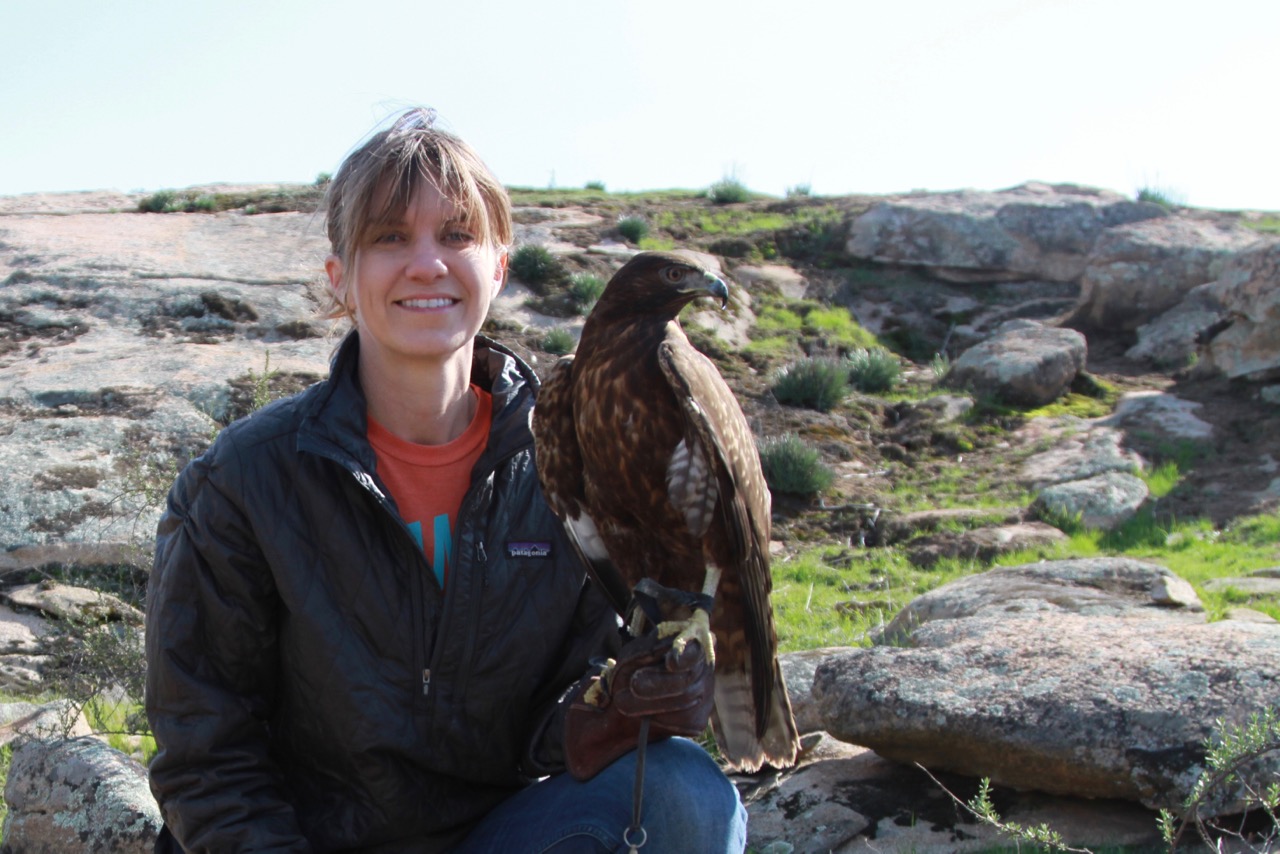 26 Mar Plucker: The Story of a Lost and Found Red Tailed Hawk

In this age of the ever-expanding human population, we see so many headlines of people doing horrible things and animals bear the brunt of our callousness towards each other. The story of Plucker, my red tailed hawk that I hunt with for falconry here in San Diego, California, has some hints of this. But more importantly, this story gave me hope that people – strangers even – can still do extraordinary good without ever being asked.

“Conor, I don’t understand what’s happening. I think I just lost Plucker,” I told one of my falconry friends as I stood at the base of a small eucalyptus tree one cool Friday morning in March, my Marshall radio transmitter receiver pinging loudly in both of our ears as he and I both went through the various stages of disbelief from either end of the cell phone. The receiver was saying my bird was near, but there was no red tailed hawk in sight, no pleasant jingle of a falconry bell. Something had happened to my bird, Plucker’s, radio tail mount, so that it was close but my hawk was not. 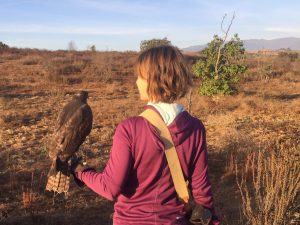 Plucker and me out in the field

It had started out an exciting day in the field, more so than most of my falconry days had been in a strange season of Southern California falconry. Frustrated with few flushes, or slips as we call them in falconry, and my two red tailed hawks that were having a hard time adjusting to my new pointer puppy, I had been having a tough falconry season committing myself to two hawks and a busy work and business travel schedule. I was only just beginning to hit my stride as March and the end of the season rolled up, bringing with it the challenge of the territorial displays and nest building of the native hawks and corvids. 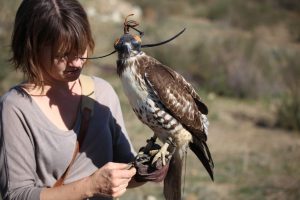 Not too long after starting the training of my red tailed hawk, Joplin, in September of 2017, my friends Conor and Paul arranged for me to have a dark morph red tailed hawk male transferred on to my falconry permit. Dark morphs are indigenous to the Western US and are uncommon. While many falconers prize them and I was grateful for my friends’ confidence in me, I simply love flying red tailed hawks and the color makes little difference to me. Not knowing that he came with a name, I called him Boone. Paul and Conor always referred to him as Plucker.

On Friday, March 9th, I arrived early and started out with Joplin, and then brought out Plucker. We had some great flights and a little after 8 am, a man walking four dogs, flushing and chasing every rabbit on the hillside walked by, and I had a feeling my morning might be over. I began walking back toward my pickup, looked over my shoulder, I gave Plucker a call. He immediately headed toward me and then suddenly did a hairpin turn and flew over a ridge behind him. Thinking perhaps he had flushed a skittish rabbit, I worked my way uphill after him, expecting to find him either down on a rabbit or sitting on a rock just out of sight. 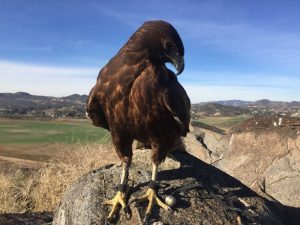 Plucker the red tailed hawk the day he flew off

It turned out to be the kind of ridge that just kept on unfolding, rolling out in many different angles, and as I dipped down and crossed each fold of the ridges, I began to realize I really didn’t know where my bird was and I should probably get a better view. Unconcerned, I climbed up to the spine of the hill and began calling him every once in a while, knowing that he would come to the glove from wherever he was when he heard me. It took about 15-20 minutes before I realized I needed to track him as a I hadn’t heard a single ring of his bell. I still wasn’t worried, he has my best Marshall transmitter on with a fresh battery and the longest range. The receiver said he was close.

And that’s where I ended up, just a few dozen yards down that hill, staring at a small empty eucalyptus that taunted me with the lying receiver pings that said bird was close. I was stunned, and completely unable to process what was happening. I always turned to my friends in good times and in bad, and this was a situation I had no idea what to make of. After hanging up with Conor, I walked and drove around the area for the next few hours without a single sign of my bird. Just before having to head home for an appointment I couldn’t miss, I went back to the eucalyptus tree and searched again for his transmitter. After looking in the tree and the grass, I finally found it sitting neatly in some shrubs near the base of the tree. The feeling of emptiness holding the Marshall tail mount in hand overwhelmed me. A few hours later, I texted Paul to tell him what happened. He quickly responded, “Do you think someone took him?” The thought had never occurred to me. 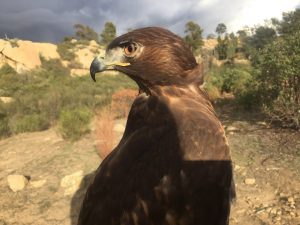 So many hours and emotions go into a falconry bird that they are nearly priceless.

Later that afternoon, my partner Andre and I returned to canvas the area for my little lost red tailed hawk. A few false leads and sad tears later, we ended our search at dark. The next day brought rain, more tears, and no sign of him.  Each day I returned, rain or shine, and started by glassing the field, and then proceeded with wider and wider circles of the area. I found tons of red tails, but not a single dark morph in sight.

By Wednesday night, I was completely dejected and could barely drag myself out to keep looking again. My family was coming to visit that weekend for my mom’s birthday, and I was utterly exhausted. Thursday evening found Andre and I eating a late dinner after a long day. Idly checking social media for the first time in a while, I happened upon a posting in a Facebook group that said “Did anyone lose a red tail in California?” with the subsequent comments that clearly indicated they were referring to a dark morph red tailed hawk but I could not see a picture. I stopped eating and started hopping up and down yelling. I frantically submitted one of the pictures I had just taken right before he had taken off and tried to get more information.

Through a series of messages and connections with friends, I was put in touch with one of the people who had originally shared the posting, Jessica.  From her I found out that my bird had landed in the yard of her friend, Tammy, near Ridgecrest and Bakersfield, 200 miles north. Tammy went to take a picture of him, and he landed on her arm. She posted him in the local lost and found. She then announced that she had decided to take him to the animal control. Apparently, a man was waiting for her in the parking lot of the animal control who claimed it was his bird who claimed it was his bird he had flown earlier that day, and away they went. 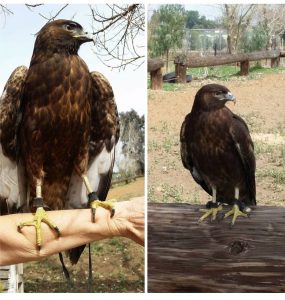 That night, I barely slept a wink, filled with anxiety over the whereabouts of Plucker and who was this person claiming that my bird was his. The next morning, filled with frenetic energy, I spoke with Tammy, Ridgecrest Animal Control, and California Fish and Wildlife Department at least three times.

Tammy was a wonderfully generous person who was deeply concerned about Plucker, feeling awful about this situation, and wanting to do everything she could to help. She did provide a name, physical description, vehicle description, and told me that she had tried to drop the bird off at the Ridgecrest Animal Control, which I called soon as I got off the phone with her to find out how to review their parking lot surveillance. From there, I was back on the phone with Fish and Wildlife, and then with my always helpful local game warden.

That afternoon, feeling better that my game warden was on the trail, my mom arrived and my mind began to slow down a bit. At 7:30 as we were eating dinner, I got a phone call. I didn’t know the number, but I knew it was about Plucker.

“Hello, Hillary? This is Jessica, I was talking to you last night about your hawk? I have him. I have your bird, and I’m driving down from Ridgecrest to get him back to you!”

That’s right. Jessica, a complete stranger, drove three hours up to Ridgecrest from Southern California to find my red tailed hawk for me when we didn’t even know he was out in the wild. She went on to say that she believed Plucker had sour crop and that whoever had him had cut off his anklets and jesses before letting him go.

I would later find out when I met Jessica and her daughter, Makayla, in a parking lot in Temecula an hour later that Jessica had put a dog crate in the back of her pickup, grabbed a purple gardening glove and some chicken breast, and headed north. After coordinating with Tammy, who was quite upset about the whole situation, they started driving around. Makayla spotted Plucker on a telephone post, Jessica coaxed him down to her glove, and popped him in to the crate. Though he had no falconry equipment, there was no mistaking that it was Plucker.

I tried to explain how many illogical twists and turns this story had to the adventurous duo as I filled their truck up with gas. That they went up to Ridgecrest, that they found the bird at all, that they even knew how to call down a falconry bird. It is hard to wrap one’s mind around this series of events. Jessica explained that in dog rescue, that is just what is par for the course when someone loses a dog or maybe an animal rights activist sets an animal free that has no business fending for itself in the wild.

Plucker wasn’t in great shape after his recovery and it took some time to nurse him back to health. It was clear from the 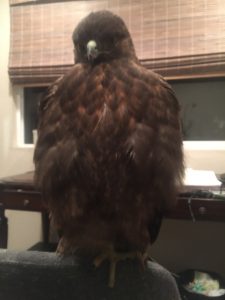 condition of his feathers that he had been in human care for several days, perhaps even from the time he left the field from me.

To this day, my mind is still blown by an unlikely series of events, the compassion and fortitude shown by Jessica and Tammy, and the help that so many others in the falconry community offered me. For as many people that showed the worst sides of humanity, there were plenty more that have shown me the best in Plucker’s escapade. I will always look at falconry differently.

This sums up well what training birds has taught me. It has brought out the best teachers, carers, and support systems in many of us, and it has brought out the prideful, the vain, and those that prey on the silence and weaknesses of others. Caring for and training animals is a fantastic equalizer as well as a lie detector unparalleled, because the behavior of the animal is guileless. It tells the story of the environment that has shaped it. To unlock the true potential of a relationship between a human and an animal, we have to suspend vanity, share knowledge with one another, and like friends and strangers did for me, remind yourself that there is good in this world and people will do the most remarkable things for others without being asked. 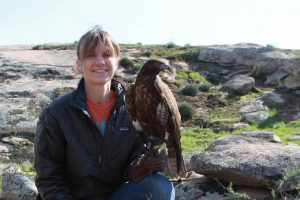 Plucker and me at home