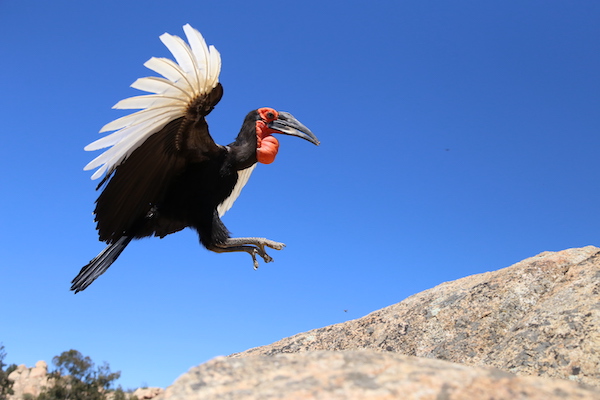 Southern Ground Hornbills are native to South and parts of East Africa.

Kipling helps spread the word about the Mabula Ground Hornbill Project and their tremendous efforts at research, rehabilitation, and rescue in South Africa. He has been the subject of fundraisers and campaigns, raising thousands of dollars on their behalf. Kipling is often the first encounter for people who have never met a Groundhornbill before, or even heard of one. He is as charismatic as he is beautiful, and he leaves an indelible mark on guests’ memories of ABI.

Kipling is a memorable part of each and every farm and aviary tour. Guests can also sign up for a Hornbill Hike and see the world through a very playful and intelligent hornbill’s eyes! Talk about a one-of-a-kind experience!

Likes: Being the center of attention

Dislikes: Not being the center of attention

Ground hornbills are considered some of the longest-lived and slowest breeding of all birds. They can live up to seventy years and it takes a pair nine years to raise a single chick to maturity.

Ground hornbills are often collateral damage in elephant and rhino poaching, where a carcass is poisoned to keep the vultures from giving the poached animal’s location away from rangers. Because hornbills also scavenge, they will consume the poison alongside the vultures.