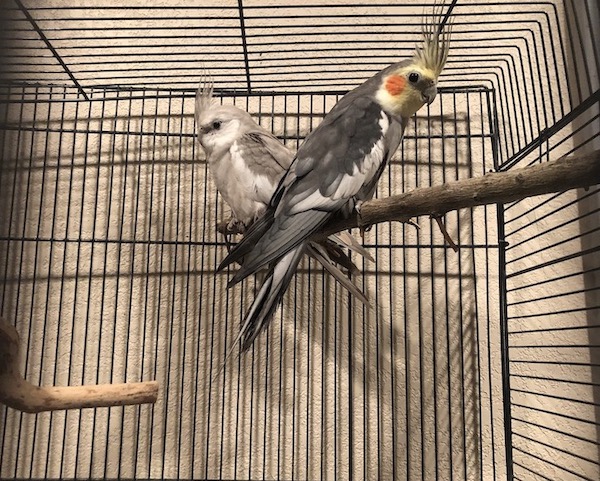 If you have ever brought a new parrot home and asked the social media hive mind how to get your nervous new friend used to you, chances are good that someone has told you to pull up a chair and calmly talk, sing, or a read a book to your parrot. I’m here to tell you that far from being a trust-building activity, it can actually make your parrot more afraid of you.

The Golden rule of animal training 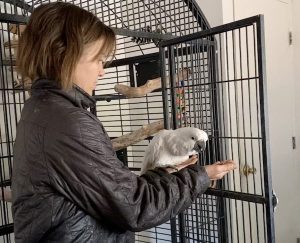 treated. How do you know how animal wants to be treated? The truth is you don’t, and boy is it a slippery slope, that one! But response blocking, which is what the above described method of talking, singing, and basically forcing your presence upon the animal, doesn’t actively build trust. It teaches the parrot that nothing it does will get you to go away, so give up. Just like your creep outside the kitchen. So let’s start with some choices, because choice looks at how many degrees of freedom an animal has when it is interacting with you, and thus control, and control is a good thing. Control builds trust.

The chair method of taming and training parrots

The chair method, as it is often referred to, or sitting next to your parrot and talking, reading a book, or singing, is what is called one-way communication. This is to say that we ignore the unspoken communication of body language that the parrot shows us by not reacting if he shows signs of discomfort: moving away, clinging to the other end of the cage, slicked down feathers, refusing to eat near us, displaced preening or slamming toys, and other forms of anxiety. By not reacting to this form of nonverbal communication, we are simply having a one-sided conversation, forcing our goals upon the other party, teaching them that their “words” are ineffective, and in effect, preventing us from having the bond that each of us is capable of. This manner of interfacing with our environment is so ingrained in our cultural paradigm that we don’t even realize that we are, in fact, using some form of force or coercion in order to get the individual to perform the behavior that we desire.

We can utilize a number of different forms of control-based programs that allow the parrot and ourselves to engage in a more active manner of relationship building. This will not only accelerate the relationship building process, but it will build with two-way communication from the beginning. This article focuses on nervous parrots who may or may not be able to interact without biting, aren’t stepping up confidently, if at all, and may not even take food from the hand.

If Your Parrot Takes Food

If you have a parrot that take food from your fingers but you don’t have a lot of confidence that she has the skills to step up without biting or showing other undesirable behaviors, then you might have seen some of the work that we did in the beginning with one of our client’s birds, Snowball, a five year old male umbrella cockatoo. Snowball came to his new family with very few skills and would bite the arm hard or lunge at the face when he was uncomfortable. Due to the intensity of his biting and the subtle nature of his warning signs, we worked with him on some hands-off behaviors first to get him comfortable and confident before we moved forward to where he could do some damage if he got frustrated or confused (which was not hard, given his limited understanding of how to be around people). We taught him to target around the cage, which helped us learn the mechanics of feeding him treats. This was particularly valuable as sometimes, Snowball would really grab at the fingertips quickly. We also taught him a very strong stationing behavior on his door perch so that he had a lot of history on it. This helped immensely for step up training when the time came.

Training these behaviors a couple of times a day before meal times gave us the opportunity to get used to Snowball’s way around humans. It also showed him, because he was so nervous around new people and in this new environment, that when we showed up, it was going to be worth his while. That is, I had something he valued every time he saw me in these early days. Sometimes, we clunky, oafish humans believe that our presence is inherently valuable. The chair method for taming and training parrots relies on this underlying premise: See? I’m not so bad. But what we don’t understand is that maybe we are! Without adding bonuses, we are really big, and there is a chance our new parrot came to us with experiences that weren’t always pleasurable around humans. So you could really be that bad.

If Your Parrot Won’t Take Food From Your Hand

When I first brought yellow bibbed lory Beans home, he had lived in an aviary for a year and was wild as the hills. Instead of putting him smack in the middle of all of the activity in the living room, I put him in a quiet extra room I had. While he wouldn’t take food from my hands, he wouldn’t ping pong around his cage if I entered slowly. I did have to feed him a few times a day, after all. Lories are messy and require regular diet changes.

I had arranged a treat bowl so that it was closest to the door that I entered from so that I could enter slowly and low so as not to spook him. I placed some mango in the treat bowl and he would immediately come down and eat. I gradually 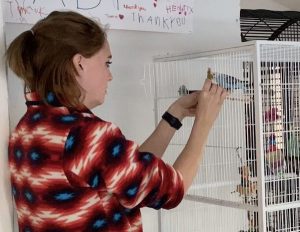 began approximating my hand closer to the treat bowl as long as he stayed calm and eating. It always had mango in it so that my hand was valuable.

After three training sessions, I had my fingertips at the cage bars, and Beans, while he was eating mango from the treat bowl, reached up and nibbled from my hand. From that session on, he only ate treats from hand.

This method we use with a lot of birds, especially sensitive budgerigars who just don’t know how to eat from the hand yet.

If Your Parrot Won’t Let You Near Without Getting Nervous

I love telling this story about a parrotlet training consultation that I got to do with my whole family watching. A friend of my mother’s had three parrotlets that she desperately wanted to have a relationship with, and they were terrified of her. They would ricochet around nervously every time she even looked at them, much less changed their papers, their food and water. So when I visited my family one spring, we all schlepped over to her house to watch my session. Because they were so nervous getting anywhere close to the cage, there was no way to even offer food as a treat, much less see if they would eat in front of us. I began a session with negative reinforcement, known as the C.A.T. procedure though I didn’t know it at the time! C.A.T. stands for Constructional Aversion Treatment and combines negative reinforcement with positive reinforcement for amazing results. Stay tuned for more information soon

I started at a distance away from the cage where the birds were calm and I moved forward slowly. When the birds showed the first sign of alert, I stopped. When they calmed back down I stepped away from them, increasing the distance between them and me. The space was the reinforcer for their calm behavior. In just a few minutes I was already at their cage, where they were calm as could be. We proceeded with the rest of the training program using their favorite treat, millet.

After the session on our way home, my brother was incredulous. How did you do that, he asked. And then, and I’ll never forget this: “Was that magic?”

Negative reinforcement is something that we have railed on for many years as the ugly stepchild of positive reinforcement. Something we did before we knew better. In fact, when applied under certain circumstances, it can be used with incredible results.

For members of the Avian Behavior Lab, we will post a worksheet and video series of the CAT procedure in the Resources section.

For those of us who are aching to connect with our parrots in a real way, the gauntlet of well-meaning advice can do us dirty if we don’t have the resources and foundation to assess the basis for the information we receive. Some suggestions might work well on certain individuals for reasons we don’t know, but aren’t sound pieces of advice that offer lasting, trust-building methods for effective communication. The best we can do is to keep learning for the sake of the happiness of our feathered and human flock.

Want more meaty parrot behavior articles, training videos and podcasts straight to your inbox? Hurry up and get on the Avian Behavior email list!

Did you know you can try out an Annual Membership, either Basic or Premium for just $3 for ten days? Get access to our community forum, ALL the courses, and our private Facebook groups. There are HUNDREDS of posts from biting and screaming to enrichment inspo.

Coupon code is TEN for any annual membership.