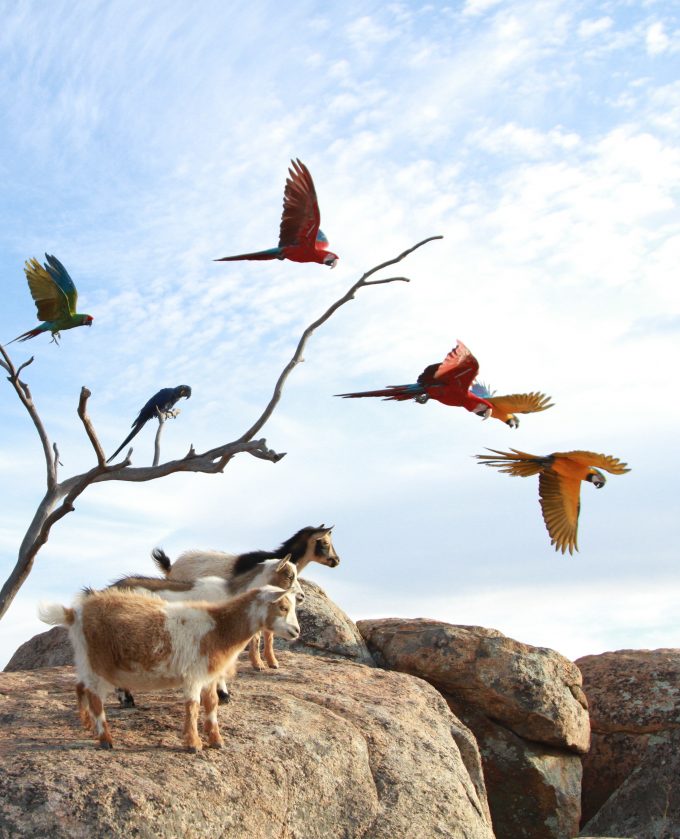 Nuts, seeds, grains, grass seeds, nectar, fruit, leaf buds, much of their diet in the wild is actually unknown

Avian Behavior International is home to 11 species of parrots. Our residents are:

Parrots are incredibly widespread, with species found from North America through South America, the Caribbean, Africa, Asia, and Oceania. Feral parrots have even made colonies in the Europe and the UK.

Parrots have historically suffered from capture from the pet trade, though importation laws and robust captive breeding efforts have curbed these activities in the US and other Western countries.

Now, their biggest crisis is habitat loss to development, mining, agriculture, and pollution. Parrots as a genus are among the most endangered of all birds. ABI parrots help us tell the complex nuances of conservation in a rapidly changing world.

From palm oil plantations to native poachers and trade agreements, never has there been a time when preservation has been more challenging.

How You Can Meet Them

Watch them fly overhead during the Free-Flight Macaw Experience or enjoy a fun afternoon together with the Picnic with the Parrots experience!

Likes: Socializing with the guests

Parrots have a bone in their tongue that allows them to be very dexterous when eating and chewing.

Parrots have language and dialects, even down to the little Australian budgerigar. They will give each other “names,” which are unique noises they make when they see each other.

One of the most famous parrots, Alex the African Grey Parrot, was a laboratory specimen who Dr. Irene Pepperberg attempted to show higher language with. While Alex had a huge vocabulary, much of her work has been contested in other papers, as it was never able to be replicated with any other parrot, and the methods seem to suggest that Alex would often sample different sounds until he was finally rewarded for the right one.